The future of airports 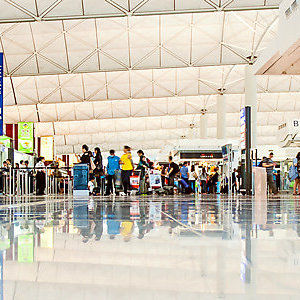 Development of airport infrastructure has lagged behind travel growth. Traffic at some major airports is already exceeding planned capacity while other airports are starting to experience congestion. With airport infrastructure under massive pressure, preparation is crucial. To understand what this means, we reached out to several people across the industry. Hereʼs what they had to say.

Have you ever heard the phrase, “getting there is half the fun”? The right airport can complement a great travel experience by making it easy for passengers to make their way through check-in, bag drop and security to their departure gate. The right airport also provides good opportunities to eat, shop and relax along the way.

The expectation? An airport that elevates both the passenger experience while maximizing revenue potential. Thatʼs why the infrastructure surrounding an airport – the roads, parking spaces, walkways and transit facilities – and the infrastructure underneath the airport, such as the utilities and drainage, are so important. They are often the first things that passengers experience and that make a big impact, and a lasting one, on first impressions.

The reality? For passengers, it is one of frustration, with crowded terminal concourses, increasingly common flight delays, long queues for take-off, and circling of aircraft in stacks prior to landing. The growing scarcity of suitable landing and take-off slots is leaving airports unable to cope with further expansion. This, in turn, is having a knock-on effect on airlines, with nowhere for them to operate their newly delivered aircraft.

Worse still, if you think that the skies are congested, then consider this. According to a new report from the International Air Transport Association (IATA), passenger numbers are likely to surge in the next couple of decades. IATA expects 7.2 billion passengers to travel by air in 2035, a near doubling of todayʼs 3.8 billion level. Its forecasts, published in the Groupʼs 20-Year Air Passenger Forecast report, are based on an annual compound growth rate of 3.7 % a year, led by booming growth in Asia.

This doubling in growth of air travel is placing extra strain on airports that are already creaking at the seams. New challenges include handling the increasing number of passengers, freight and baggage in an efficient and cost-effective way, as well as creating environmentally friendly solutions and products, plus satisfying the rising security standards now required worldwide.

These challenges have thrown into relief the inefficiencies of airport infrastructure. Most airports were designed and built decades ago to accommodate traffic demand at the time, and although most have been overhauled to meet modern-day demands, many are falling woefully short. As a result, the seamless travel experience, which we all expect, has become a gruelling one, leading to low passenger evaluations.

Is this bumpy ride likely to continue? Alexandre de Juniac, IATAʼs Director-General and CEO, speaking at the World Passenger Symposium in Dubai, painted a bleak picture. He said that no matter how much or how quickly we innovate processes, “there is no getting around the need to be both smart and quick in growing airport and airspace capacity”. He cited rising congestion, particularly in Europe, while pointing to fast-growing areas in the Gulf region and China. “I fear that we may be headed for an infrastructure crisis that will impact air travellers,” he said.

De Juniac added that the capacity crunch will also have an adverse impact on the global economy. “Inadequate infrastructure negatively impacts the passenger experience in the form of flight delays, longer routes and inefficient schedules. Then there is the cost to economies of lost business opportunities, employment and social development. Remember, aviation is a critical catalyst for economic and social development, supporting 63 million jobs and some USD 2.7 trillion in economic impact.”

It is clear that maintaining and enhancing airport infrastructure is critical and is one of the greatest challenges for airport owners and operators. They need to identify priorities, assess costs and deliver projects on time and budget, while keeping operations running smoothly.

Switzerland, for all its renowned clockwork-like efficiency, is not immune to these challenges. Despite a brisk growth in recent years (driven by increases in population and economic wealth), current airport infrastructure inadequacies are putting a brake on fully capitalizing on this growth.

At Genevaʼs international airport, for instance, an estimated 25 million passengers are expected in 2030. According to the team responsible for infrastructure and planning, the airport, in its current configuration “is reaching saturation and its operations, while mostly optimal, are no longer sufficient to provide the required level of service”.

However, in true Swiss fashion, the airport is rising to the challenge. The Infrastructure and Planning Team composed of Ilham Hikmi, Nicolas Gaspoz and Guy Marguet say large-scale projects and renovation work have been carried out in the past years to meet growing demand and the team is now looking ahead. “Future development projects and renovation work is planned in accordance with master plans that define relatively accurately the development needs beyond ten years.”

Such spectacular construction projects involve structural changes and require careful coordination as ongoing airport operations must be maintained while the work is underway. Alongside major refurbishment, short- and medium-term management activities will ensure the smooth functioning of operations, keeping passengers happy. These include organizational initiatives to support developments and meet the growing demand.

In the coming decade, there is a vast amount of planned capital investment in airport-related infrastructure, with global growth in airport investment estimated at 2.6 % a year. This amounts to a cumulative investment of USD 750 billion between 2015 and 2025, based on a study by PricewaterhouseCoopers and Oxford Economics.

With the lead-time for new airport construction taking anything from five to 20 years, depending on location, future-proofing airports for ever-busier times is a huge dilemma. So, where is the best place to start? Strangely enough, despite our hi-tech, whiz-bang, electronic age, we have to go back to basics. Wilson N. Felder, former Director of the US Federal Aviation Agencyʼs William J. Hughes Technical Center in Atlantic City, says the most pressing upgrades to airports have to do with bricks and mortar, not sophisticated electronics. The centre is known for its world-class laboratories and high-fidelity aviation system test facilities.

Inevitably there is a wide variety of airport capabilities out there, and while digital systems may be important in Europe and North America, there are other places around the world where things like basic runway and taxiway construction are of primary importance. When the leader of a delegation of seven Southern African Civil Aviation Authorities was asked about his priorities for the national infrastructure some years ago, instead of radar systems and air traffic control automation, he responded with “paved runways”.

However, Felder says that airports are also highly developed and sophisticated systems existing across a wide spectrum of different levels of technology. At the bottom end are uncontrolled dirt strips with minimal infrastructure (and, in some cases, no infrastructure). At the top end are large, multi-runway international airports with substantial traffic loads which must be prepared to integrate aircraft coming from different points of origin across the globe.

Up in the air

Decent runways are one way of keeping the big wheels turning, but what about regulations? In our ever smaller and highly interconnected world, it is a sad fact there is no consistency in regulations. Airport projects are particularly complex because they involve such a wide variety of stakeholders and revenue sources. Frequently, there is a lack of integration among airport users and equipage. Although these all comply with International Civil Aviation Organization (ICAO) guidelines, there is considerable variation in how those guidelines are implemented, leading to potential operational difficulties.

Whatʼs more, the respective actors in the overall airport organization are subject to different standards regimes. These include aircraft maintenance, flight operations, ground handling (including fuelling), security services, airside services and air traffic control. Even when some of these processes are frequently done by the same organization, they are usually subject to different systems, standards and safety cultures.

According to Felder, large and sophisticated airports operate in a variety of standards regimes. Take, for instance, aircraft avionics. These are built to internationally coordinated standards brought into effect, for example, by the Radio Technical Commission for Aeronautics (RTCA) in the US and the European Organization for Civil Aviation Equipment (EUROCAE) in the European Union. Physical structures are the domain of civil engineering as practised in the airportʼs national environment; and signage, lighting and navigation are subject to ICAO rules. As the worldʼs airways become more crowded and the building of new sites more challenging, standardization clearly is on the radar.

The recently created subcommittee SC 17, Airport infrastructure, within, ISO technical committee ISO/TC 20,Space and aircraft vehicles, is expected to give a much clearer picture of the entire scope of the problems. The end result will be the development of International Standards for airport infrastructure, such as:

As the new Chair of the subcommittee, Felder believes that the window of opportunity is wide open – from a technical point of view. This, in turn, will be of benefit to the regulations that are still lacking today.

“One of the most sensitive tasks for the standardization of airport infrastructure is adjudicating the role of the various standards-setting entities with interest and jurisdiction in the airport environment,” he said. “From the ISO/TS 20/SC 17 point of view, the main objective needs to be ʻnot to attempt to do too much too soonʼ. We need to understand where the greatest advantage in standardization may be and focus on that.”

Felder says the most critical upgrades to airport infrastructure are things like improved pavement, end-of-runway arresting devices, and approaches to tackle environmental issues such as water-quality impact from fuelling, de-icing and aircraft servicing. Other important advances include digital infrastructure for surface guidance, lighting, and data collection on aircraft position on the taxiways, which is an important missing element in air traffic control.

Not all of these improvements are within the charter of ISO/TC 20/SC 17, Felder adds, but says collaboration with other organizations is necessary to ensure they are dealt with, while ISO identifies the areas that are most pressing within its sphere of responsibility.

Thereʼs no question that in a world of open borders and global connections, the airport sector will continue to encounter testing times. It will require a lot of juggling to make existing resources work harder and faster as demand grows relentlessly. The challenge is to manage this growth efficiently, securely and safely.

The solution is to bring an airportʼs entire infrastructure up to standards and keep it there – from take-off and landing to ticketing, from the safety and security of passengers and equipment to energy and ground transport. These are complex tasks that demand International Standards.

As the airport industry continues to grow, standards will help to fix current infrastructure problems, make airports more environmentally friendly and, most importantly, turn them into places where travellers actually want to spend time.

There is one thing, however, that all airports must have in common: being prepared for future growth and increasing demand, while not creating operational or safety issues for aviation. Until then, itʼs “ground stop”.

This news comes from the ISOfocus:

ISOfocus
Our flightpath to the future
Flying is more popular than it has ever been. Once seen as a luxury that only a privileged few could afford, air travel has become a genuine form of mass transport over the past few decades
Elizabeth Gasiorowski-Denis